In November 2014, lecturer and facilitator Gereon Koch Kapuire (Namibia University of Science and Technology), PhD candidate Daniel G. Cabrero (University of West London and current exchange-researcher at Namibia University of Science and Technology) revisited a female elder who we worked with last October.
The aim of this visit was to suggest the participant to recount us a prompted narrative of “a school-girl”, and a subsequent one of this girl having become “a woman”. We were searching for third-party descriptions rather than referring to the person herself, as this we had seen it did not work with other ovaHerero communities, who ended up stereotyping themselves.

By adding a scenario to the description, we obtained an exposition of emotions (i.e. girl worried, playful or spotlighted by others depending on the context and emotional state, while physically she got described as solely being well-dressed and groomed.

The girl now turned-into-a-woman was to carry traits from her youth.

When we asked this participant for a further physical depiction, she drew and coloured both personages and orally added further detail relevant to the depicted outcome. 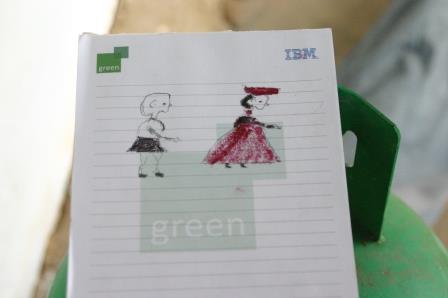 Asked how she the information provided during the session would be transfer for us to take with, she claimed that ovaHerero are an orally-bound ethnic group and that so she could repeat the stories all over again for us to write them down and take it with us alongside the drawings she produced.

As a scientific literary result, this session is included in both, a scientific paper published at the C&T’15 conference held in Limerick (Ireland) in June 2015 and an upcoming publication at an international conference to be held in Aarhus, Denmark, in August 2016.