This article is intended to present the outcomes of the community engagement workshop that took place in Mariental on the 12th of April 2016.
Home Blogs Community Engagement Workshop
0   
By Michael Chamunorwa Blogs Mariental April 26, 2016

1. Introduction / Purpose of the trip

This article is intended to present the outcomes of the community engagement workshop that took place in Mariental on the 12th of April 2016. The objective of the workshop was to get prior informed consent (PIC) to get permission from the Namas Traditional Authority (NTA) from //Karas region to carry a survey on medicinal plants, food and beverages. Moreover, the workshop was to provide awareness about the Access Benefit Sharing (ABS). ABS refers to the ways in which genetic resources may be accessed and how the benefits that result from their use may be shared. Namibia’s ABS legislation to regulate and control genetic resources and associated traditional knowledge is in working progress. The ABS draft Bill was tablet in Parliament last year 2015 November for first reading. It is on this background that PIC should be conducted with all relevant stakeholders as a starting point for ABS.
The workshop was planned for two days from 11 to 12 April 2016. The first day was dedicated for ABS discussion and the second day was for the researchers from UNAM and NUST to inform the NTA about their research aims and objectives and to provide training on the tools used to gather data during the survey. This report is focused on what the NUST research team presented on the second day.

NUST research team consisted of Mr Colin Stanley (lecturer), Mr Pejarukani Tjituka (media student), Mr Donovan Maasz (MSc student) and Sir Gatsen Tjirare (Bachelor internship student). The team travelled very early from 6:30AM from Windhoek to Mariental. The NUST team was applauded on safe arrival at the church workshop hall were everyone was waiting patiently for them. The workshop schedule for the second day is shown in Table 1 below. Although the program started a bit late all activities took place as planned. All presentations were translated from English to Nama/Damara by Mr Kairabeb except the one of Mr Maasz that was presented in Afrikaans.

Mr Stanley started the workshop by introducing the Indigenous Knowledge Management System (IKMS) research aims and objectives. The discussion was generally about preserving IK for future generation by storing it efficiently and effectively in digital format. In order to achieve the above mentioned research mandate Mr Stanley stated that it is crucial that the rural communities partake in designing IK preservation systems. Thus a community co-based design research approach is undertaken by his research team. He further explains how the HomeSteadCreator (HSC) was co-design with the OvaHerero communities and that they are now working another version for the Ovahimba community. The participants listened attentively, traditional leaders was really impressed with the current progress of result output by IKMS and shared their appreciation of such a project during the tea break session.

Below Sir Gatsen demonstrating how users will use the orukupo website: 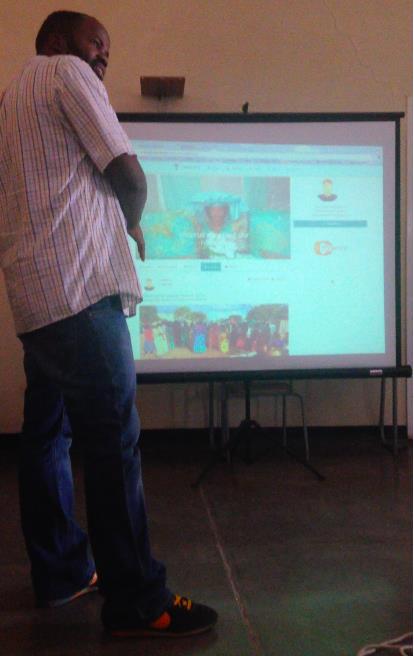 Mr Maasz explains in Afrikaans how the Data Collection (DTC) tool could be used. The delegates requested Mr Maasz to present his demonstration in Afrikaans since it was his mother tongue and the fact that all the participants could speak Afrikaans fluently. Mr Maasz explained each icon’ functionality i.e. the eye icon for taking pictures, mouth icon for audio recording, boy head icon for video recording, tree drawing icon for drawing, hand with pen icon for writing and the phone icon for gallery for collected items. Figure 2 shows Mr Maasz demonstrating the data collection tool usage and figure 3 shows the participants trying to use the app. 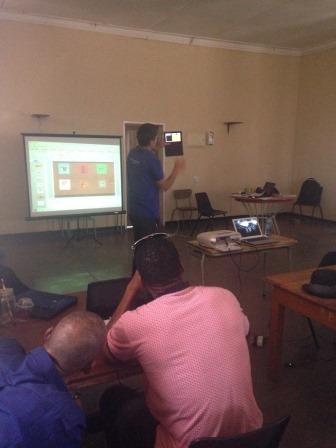 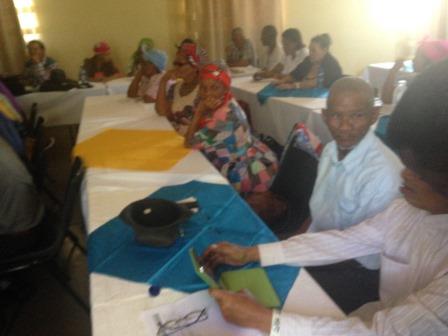 The issues raised and lessons learnt from workshop are summarised in section. Table … list raised and action plan.

Beside the issues raised the participants appreciated the idea of preserving IK and are kind on working with the researchers.